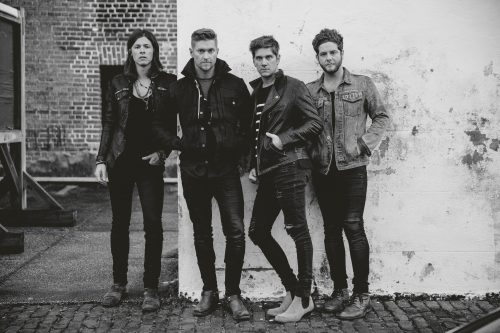 The NEEDTOBREATHE Classic is coming to Daniel Island on Monday, March 27th. The celebrity packed event will host actors, musicians, athletes and PGA professionals in a charity based event that is in its 5th year. The mission of the event is to bring awareness of One World Health and their projects in Uganda and Nicaragua. NEEDTOBREATHE has created a nonprofit, NEEDTOBREATHE Cares, that has become directly involved with the planning and execution of a medical facility in Nicaragua. Read our interview with Bear Rinehart (lead guitar, piano, vocals) to find out more about the event and how their charity event is helping people around the world.

SCMG: How long has the band been involved with the Classic? We know you were involved for many years. Why did you decide to get on board as a partner?

BR: We are friends with the guys at Commonwealth Cares Foundation, who is the founder of the event. They didn’t have a musical element at that time, and we thought we could bring an entertainment value to the Classic. We had no idea how much work it would be, but it turn out to be one of the most fun things we’ve done all year.

SCMG: How many players are you expecting this year?

BR: We normally have about 200 players on the greens, and about 500 people come to the concert.

SCMG: You have quite the celebrity lineup. It’s nice to have that much support for your event! How do you recruit people to join teams?

BR: It was tough at first, but now we have guys that are coming and asking me to get involved – both athletes and musicians. That makes it easier and a lot of fun. They can bring their families down for a vacation. These guys believe in our charity, so they carve out a weekend for it and make it fun for their family too.

SCMG: What can you tell us about the VIP Experience and afterparty? The concert?

BR: We have an auction the night before, mostly for our sponsors and celebs. It’s good to get the asking for money out of the way before the actual event. Golf is a morning and afternoon event, and we have all kinds of things happening on the course. It’s all about having fun with vendors and community involvement. Afterwards, it’s just a big party. Everybody who writes songs gets up to play, and it ends up being big melee at the end of the night. This type of concert couldn’t be put together for a ticket price. It just couldn’t happen. Just amazing. This year, we’ve got Ben Rector, Mack Powell from Third Day, Matt Kearney, and a whole lot more that will be on stage.

SCMG: We know you have a new project in Nicaragua. Can you tell us about your nonprofit, NEEDTOBREATHE Cares?

BR: NEEDTOBREATHE Cares is our nonprofit that is opening a health care facility in Nicaragua. We work directly with One World Health, which was formed by Dr. Ed O’Bryan and Matt Alexander. They got together on Folly Beach and wanted to do something to fill a need that they saw missing while on mission trips. They formulated their model in Uganda, and it did so well that they opened a 2nd facility. The 3rd is located in Tola, Nicaragua. We have recently opened the NEEDTOBREATHE Medical Center, bringing quality and affordable healthcare to those in need in the area.

This project was a lot of work. We had to learn how to work well with the local churches, government, and the local community. We became more and more efficient, while learning what works. Every country is different though, with different governments and people. We spent $250,000 in building, staffing and getting the Center up to speed for the first year. With One World Health’s model, they should be self sufficient after that, and it will be running on its own. It’s a huge facility with rotating specialists (OBGYN, Surgeons, Cardiologists), a pharmacy, one dentist, one working lab, an ultrasound like you’d see in the States. It’s almost like an Urgent Care but even better. They use a sliding scale for payment and charge what the patient can afford.

SCMG: How will the Classic help with the new health center in Nicaragua?

BR: 100% goes to One World Health and our hospital. $1 from every ticket sale from our concerts also goes to the charity. It’s a great aid to our band’s mission as well as helping those in need of great healthcare.