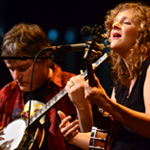 When it was announced that husband and wife Bela Fleck and Abigail Washburn would be performing at last year’s Spoleto Festival in Charleston, I was elated. While I was looking forward to hearing Fleck’s unorthodox approach to his instrument of choice, the banjo, I was truly excited to finally get to see Washburn perform live. Then, shortly before the start of last year’s festival, the performances by both Fleck and Washburn disappeared from the calendar. As it turns out, there was good reason for this. On May 19, 2013 Fleck and Washburn welcomed their first child, Juno, into the world. They had been expecting him in late June, but Juno made an early appearance, which necessitated the cancellation of the Spoleto performances by the new mom and dad.

Fortunately, the powers that be at Spoleto were able to get the couple back for this year’s festival. Whereas the two had been scheduled to perform separately with their own bands last year, this time it would be Fleck and Washburn together onstage.

Ever since hearing her 2011 release “City of Refuge,” I’d become a huge fan of Washburn’s, who also plays the banjo, a beautifully complex stringed instrument that is far too often unjustly the punchline of jokes involving hillbillies and paddling faster. In the hands of artists such as Fleck and Washburn, that instrument sounds other-worldly. Fleck likes to play the banjo like Les Paul played the guitar; with a flair all his own and a style that shows that there is so much more possible than the usual jangle-jangle sound we normally associate with the banjo. Washburn plays in a completely different manner than her husband, employing the clawhammer style when playing. Where Fleck’s sound can vary from classical to jazz fusion, Washburn leans more towards the old-time sounds of the turn of the last century. She also likes to incorporate elements of Chinese folk music in her works. Washburn has spent a considerable amount of time in China and speaks fluent Mandarin.

There didn’t appear to be an empty seat left in the TD Arena at the College of Charleston by the time Fleck and Washburn took to the stage this past Sunday night. The show started a little late to give everyone time to get seated, and when the duo sat down among their instruments they wasted little time in getting down to business. Washburn kicked things off with the title track to “City of Refuge,” playing the hypnotic riff that is the song’s backbone while singing in her beautifully hushed voice. Fleck accompanied her on his banjo, but never made an attempt to show his wife up during the song. It was pretty fascinating to watch the two musicians interact onstage. There was no forced lovey-dovey chatter, but rather a playful back and forth between the two, sharing that unspoken inside language that most loving married couples know. “Hey sweetie, what’s going on?” asked Fleck after that first song. “Are you talking to me or them?” joked Washburn, motioning toward the audience. Later in the show Fleck would clown around a bit while physically illustrating a point Washburn was making about how the Chinese include dramatic hand flourishes with their folk music, but the best quips and stories came from Washburn.

After explaining their absence from last year’s festival, Washburn told the crowd that she and Fleck had taken most of the last year off to raise Juno and write music together. She then advised with a perfectly straight face that with all the free time they’d had after the birth, they’d been able to write exactly one song, which is still untitled. Any new parent can likely identify. The original piece was a playful tune that found Fleck and Washburn trading licks. Washburn also played a gorgeous cover of the traditional folk song “I’ve Been Working on the Railroad,” which she gave a cool spin by playing in a minor key. “Dinah, won’t you blow your horn” has never sounded so haunting.

After “Bring Me My Queen,” another track from “City of Refuge,” Washburn recounted the story of Fleck getting pulled over for speeding near their home in Nashville. The policeman took Fleck’s license, took a long look at Fleck after seeing the name printed on it, and went back to his car for a long time. When he returned to the car, he looked at Fleck and asked, “Who is the greatest banjo player of all time?” “Um, Earl Scruggs, sir,” replied Fleck. “That’s right,” said the officer, who added, “Drive a little slower next time.” Soon after, while visiting Scruggs himself, the couple discovered that the cop was a nephew of Scruggs’, and the elder banjo player, who passed away in 2006, had a good laugh over the incident.

Washburn performed “The Love Song of Kangding” a.k.a. “Kangding Qingge,” a beautiful song that she sang in Mandarin, which was followed by Fleck moving to the side of the stage to play a symphonic piece he’d written to include banjo. The intricate playing of that piece reminded me of pieces written for classical guitar.

After a cover of Doc Watson’s “Am I Born to Die,” Fleck and Washburn stepped away from their microphones and to the edge of the stage to play the traditional “Keys to the Kingdom” with no electric amplification. Despite being in a cavernous basketball arena, the sound carried to the back beautifully. After a couple more songs from “City of Refuge,” including “Burn Thru” and “Devine Bell” (the latter of which had the crowd singing part of the chorus), Washburn told the audience that Fleck had suggested that she learn one of his songs to play during the show. “So I told him, ‘It might be good if you could lactate and feed the baby,’” said Washburn, getting a big laugh from the crowd. They ended up playing one of Fleck’s songs, “New South Africa,” then bid the crowd goodnight. Brought back for an encore by a standing ovation, Washburn and Fleck performed “I Sing Because I’m Happy,” making sure their fans left on a high note.

It was about as perfect as a performance gets. Even the audience was polite, which is saying something for Charleston. After the show Washburn and Fleck sat at the merch table and shook hands and signed CDs for fans. They had revealed earlier in the show that they donate all proceeds from their merchandise to a local charity at each show, and that tonight’s beneficiary would be the Coastal Conservation League. By the looks of the brisk business at the merch table, CCL ought to be getting a sizable check.

Kudos to the Spoleto organizers for bringing back these two incredible artists, and thanks to both Washburn and Fleck for blessing Charleston with what is easily the best show I’ve seen so far this year anywhere. 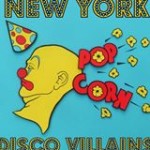 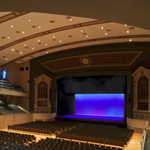