Columbia’s Chris Compton and the Ruby Brunettes have created a soundscape of haunting simplicity with the dark lounge music contained on their self-titled debut release. Described by Compton as baroque pop, the group contains both acoustic and sparse electric guitars but eschews bass and percussion in favor of keys and the trombone. The result of this textural experiment is an ambient folk sound that could easily find alignment with artists in the slowcore genre, like Low or Mark Kozelek. Compton’s easygoing voice might draw comparisons with Kozelek or maybe even a mellower Lou Reed. He carries that same deft undercurrent of melancholy as those two singers and listeners might hear a bit of Will Oldham in his poetic song writing.

The songs themselves have sometimes heavy lyrics complemented by the light, ethereal quality of the ambient-like feel of their movement. Some of the songs have a seemingly light-hearted vibe, with both “Little Birdy” and “Ring a Dong Ding Dillo” having a nursery-rhyme/ sing-song cadence. The traded and harmonized vocals with the trombonist, Catherine Allgrim, give the songs more depth and they sound great together. “Apparitions”, with its slight western feel and “Handgun Flowers”, with its perfect horns and sing-along vocals will stay stuck in your head.

It’s pretty rare to hear a band that is obviously trying to push the envelope with its instrumentation and songwriting  and actually conceive songs that might attract popularity and maybe a small dose of fame. I can hear the echoes of other ambitious bands who have played with experimental ambient folk music like Calexico or Grandpa’s Ghost, but Chris Compton and the Ruby Brunettes are carving their own niche and I hope more people can experience the unique atmosphere they deliver. 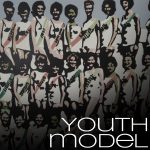