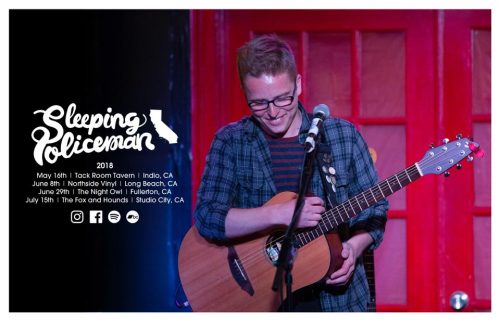 Right now, Sleeping Policeman is back to being a solo effort with myself, Charles Grace.
SCMG – What genre do you consider yourself?
This question always seems harder to me than it should be. If you ask me to describe another artist or band, I can do it fairly well. The best I can describe what I do is a weird marriage of indie rock and folk music with a hint of classical guitar influence popping up every now and then.
SCMG – What was your biggest accomplishment in 2017?
My biggest accomplishment was by far the release of my last album, The Bride in the Wilderness. 2017 was full of hardships both personally and professionally. My former band mates left and pursued other things. I had to find new living arrangements. I experienced the loss of two close family members. It wasn’t long before I went into deep depression. For a long time, I was convinced that the best album I had ever written would never see the light of day.
SCMG – What are your plans for 2018?
That’s a great question. For the first time in over a decade, I had decided to take a conscience break away from performing publicly for a while during the latter part of 2017. When the time is right, I would love to get back on the horse, release a new batch of songs and start performing again.
SCMG – Where and when can we find you?
You can find me playing at an occasional Sunday morning service in Myrtle Beach, SC. Stay tuned for possible shows later in the year.
SCMG – Who would you consider your biggest local influence?
When I first started going to shows, my favorite local band was The Artichokes. I can fan girled so hard for them. As a matter of fact, I still have the t-shirt I bought from them when I was fifteen years old.  More recently, I would have to say Brian Roessler. He is a gifted songwriter who regularly offers his time and talent to showcase other artists. I have benefited so much from sharing gigs and going to his songwriting circles in the past.
SCMG – What would they say about you?
Brian has told me plenty of times that I am one of his favorite songwriters who needs to move beyond where I am now. I think he would graciously point out how my insecurities have held me back or kept me from tapping into what he believes is a genuine talent that needs to be shared with a wider audience.
SCMG – Who would you like to work with but haven’t yet had the chance?
Mm! So many names come to mind. I will try to narrow it down to a few. On the folk songwriter spectrum, I would absolutely love to work with Glen Hansard or The Avett Brothers. John Paul White is also high on the list. I believe he could really stretch me to grow in my collaborative songwriting skills.
SCMG – What are your favorite albums of all time from any musician?
If I was only allowed one album for the rest of my life, then it would have to Grace by Jeff Buckley. To me, that record is flawless. After that, I would have to go with In Keeping Secrets of Silent Earth: 3 by Coheed & Cambria, Trouble by Ray LaMontagne, and Emotionalism by The Avett Brothers.
SCMG – If you could meet any of your favorite musicians, who would you choose and why?

I would absolutely love to sit under Ray LaMontagne’s tree for a couple hours. The man is such a beautiful mystery. I would love to hear his thoughts on the creative process and depression. As somebody who has recently and is still questioning the path forward, I think he could provide some valuable insight, just based on the little tid bits he has revealed.

If we are going with musicians who have already passed away, then I would have to say Jeff Buckley for sure. We were both born in Anaheim, California. We both came from broken homes. My last name is Grace. I have always felt this ethereal connection when I listen to his music. He truly was one of the most uniquely vocalists and guitar players I have ever heard. I would fetch that guy coffee just to pick his brain for a few months. 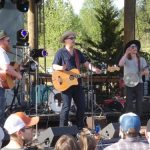 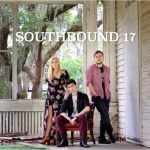