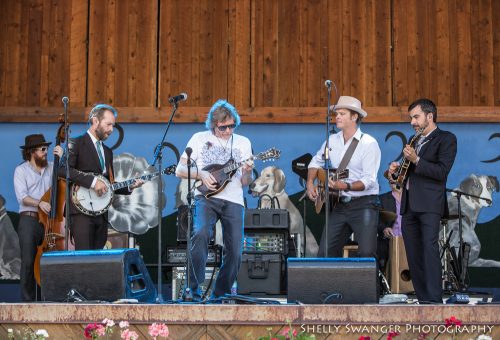 Anyone who has been to the Brevard area in North Carolina will tell you there’s just something about those mountains that inspires you. The Steep Canyon Rangers have certainly drawn inspiration from the serene scenery of the mountains, as they have become one of the most innovative and influential bands in Bluegrass. Formed in 2000 by some rowdy college boys at UNC Chapel Hill, The Rangers have continuously evolved and explored their sound to become the Grammy winning, Steve Martin supporting group they are today. Woody Platt, guitarist and lead vocalist for the group, took a few moments to talk with SC Music Guide about the band, their newest albums, and what the future holds for The Rangers.

JB: First off, thank you for your time Mr. Platt, I know y’all keep a busy schedule. Congrats on the recent induction into the North Carolina Music Hall of Fame, what was it like to receive that honor and recognition?

WP: You know it was amazing, and a little surreal when you think about it. North Carolina is such a wonderful state for music, with so much musical history in the state, and our bands a product of it. And now to be in the hall of fame, now I guess we’re not just a product of it, we are technically a part of it. It’s pretty unbelievable, it’s a goal you never set and we’re really excited about it.

JB: Y’all returned to your roots for the latest album, “Radio”, recording it over three four day sessions in 2015 with the legendary Jerry Douglas producing the album. What was it like working with him?

WP: Jerry Douglas has been a major influence and someone we admire and look up to in this business since we first started trying to learn to play the music. So working with Jerry has been a dream come true in a lot of ways and he was the perfect guy to help harness our bluegrass roots, but let us stretch out a little bit. He’s been all over the map in the music he’s played in his career so it’s been a really great pairing and I’m proud to have worked with Jerry and consider him a friend.

JB: “Radio” features the track ‘Break’ , a duet between you and your wife. Tell me a little bit about what it was like recording that song with her and the message behind the song.

WP: Well it was cool to collaborate with Sharon, she’s such a great singer and songwriter in her own right and she’s had a great career in music. It was fun to collaborate with her. The message wasn’t about us, obviously, we’re not breaking up. It was written about a close family friend and just what happened at the time, and it’s a cool song to trade verses on. It was a fun way to have her be part of the record.

JB: Y’all are North Carolina boys, how would you say the state has helped shape your sound?

WP: Well you know, several of us grew up in the mountains of Western North Carolina so the music was always around, the string band music, old time music, bluegrass music. So we were influenced by that as young people, we weren’t necessarily into it until our late teens, but we we influenced by it as children. Also living in the mountains, the mountains attract a lot of musicians. Asheville and Brevard attract a lot of players that have kind of influenced the band. Just all that, and the natural beauty and landscape of the Blue Ridge Mountains have a big impact on our music.

JB: Y’all are known for your high energy performances, what has been your personal favorite so far?

WP: That’s a hard question, we’ve done a lot of different things in so many different settings. We’ve performed in Carnegie Hall, in the White House, at some of the big festivals like Bonnaroo, we’ve been to Red Rocks. So it’s really hard to narrow it down to one night, but we’ve had a lot of great experiences. We love Colorado, we love the Northeast. And of course playing at home, we got to sing the National Anthem in the Dean Smith Center for a Duke-North Carolina basketball game. It’s almost impossible to pin it down to just one. We played with Steve Martin on the Capital Lawn on the 4th of July with hundreds of thousands of people there. There’s been so many neat things we’ve been able to do, and hopefully there’s more to come.

JB: “The Long Awaited Album” with Steve Martin was recently released as well, how did the partnership with Mr. Martin come about?

WP: You know, I actually guided his wife on a fly fishing trip when I was maybe 20 years old. I was a fly fishing guide, still am really, but I’ve been doing that since high school. But I guided them on a trip, and years later she connected with Steve, and we kinda met him formally at a dinner party and played some music and the rest is history. We stayed in contact and he liked our band and sound, he wanted to try out some touring, and he asked us to do it. It’s been a great partnership.

JB: What would you say your most memorable moment with Mr. Martin has been?

WP: It’s so challenging to say what the most memorable moment of this relationship has been, but man it was probably the Capital Lawn, stakes were high, it was on live t.v. and there were so many people. But we’ve done some cool television shows, we’ve done David Letterman three times, we’ve had Paul Simon join us a couple times. We played at the Hollywood Bowl in L.A. with Steve and the whole L.A. Harmonic Symphony and the U.S. Navy Band all on stage at once in front of 20,000 people. Just a whole lot of things like that that you don’t expect to happen happen.

JB: What does the future hold for The Steep Canyon Rangers?

WP: Well, we got a new record coming out in January. We’re doing a big show at the Civic Center in Asheville, and you know I think in general the band is just trying to grow in all ways. We like the trajectory that we have, the growth we’re feeling as a band, as musicians. We’re just trying to maintain that. We’ve been doing this a long time it seems like now, but I still think we have a long way to go. It’s exciting to think we’re halfway there!

The Steep Canyon Rangers will be returning to Newberry Opera House on Thursday November 16th at 8 pm. Don’t miss out on what is sure to be a foot stompin, good time in historical downtown Newberry. There are still a few tickets available for the show, more information can be found here. 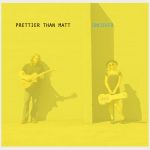 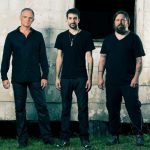