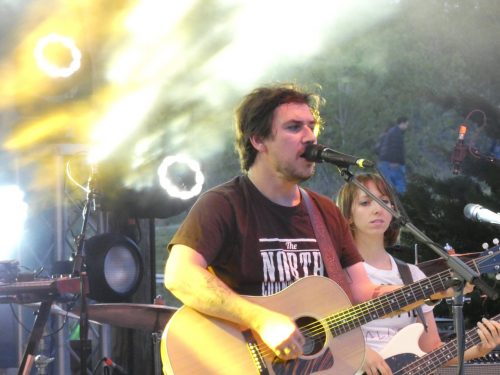 Since their self-titled debut in 2014, SUSTO has been steadily gaining ground in the music industry. Starting on a regional level, the band quickly gained a few notable fans who helped encourage them along the way, and after features from NPR Music, Paste, and the Consequence of Sound, SUSTO is poised to spread their sound even further in the near future. The voice of SUSTO is not a stranger to success in music. Justin Osborne had a hit song with his band “Sequoyah Prep School” (who recently just had an incredibly successful reunion tour of their own) in the mid-2000’s which amassed almost a million views on YouTube.

JB – First off thank you for  your time, I know you keep a busy schedule. You’ve been a pillar of the South Carolina music scene since you were 15. What do you attribute your longevity in creating music too?

JO – Wow, first of all thank you for saying that. I’m not sure how true that is, but I’m very thankful to have been involved with the SC music scene and playing music for so long, and I’m grateful that people (especially in South Carolina) have supported me so much over the years. My band had a “MySpace Hit” when I was 17ish & I had really supportive parents, I think both of those things enabled me to develop a path and a passion for making music. I just really profoundly enjoy writing, recording, and performing – to a point that even failures have been out weighed by the excitement of continuing on, and I think that has kept me in the mix, I just love it all so much that I haven’t been able to put it behind me and probably won’t ever be able to.

JB – SUSTO is an illness in Latin American culture in which “your soul is separated from your body” and is basically a spirit attack. How did you become familiar with the term and why did you choose it for the group?

JO – Yes, so I had been trying to “make it” in music in my early 20’s with my old band Sequoyah Prep School, but after years of self booking, self management, and little actual music industry progress, I was burnt out, so I quit and went to college. I was studying Anthropology and that’s when I discovered the term, in a text book. The word itself stood out to me immediately because it reminded me of some weird version or combination of the word “Sequoyah” and my name “Justin Osborne” like S-UST-O, I don’t know maybe that sounds weird, but it spoke to me. Then, as I read on and began to understand the meaning behind the word, I related to it intensely because I was going through a period in my life when I was transitioning from a religious person, to non religious, so I had quite literally experienced “Soul Loss”. I was also in a period of general confusion in my life and all the songs I had been writing reflected that, so the name felt very fitting for the project. I didn’t know then though that just by starting a new band, reinventing myself musically, that it would provide me with so much clarity in my life and a clear career path forward. I’m very grateful for the name. It feels like me. Like in the Bible when Saul becomes Paul, I found that word and named myself. Musically, it’s changed my life in a major way.

JB – The self-titled debut album grabbed a lot of ears. When did you know SUSTO was about to takeoff?

JO – Well it’s kind of funny I guess because you always feel like you’re about to take off, but never feel like you already have. So I am still waiting to “take off” but I think it’ll always feel that way. There’s always progress to be made and always room to expand and improve. Every new album feels like a step towards lift off. But, I think once I realized how quickly the first album had become popular in Charleston, and once I started getting feedback from heroes of mine, like Ben Bridwell, I realized that I had something that could maybe take me further than I had been before in my music career; so that’s when I started to put all of my energy behind SUSTO and really began trying to make things happen on a national and global level. It’s all a lot of work trying to be heard and perform all over the place, but I really love it and the work it’s taken has been fun for me all along.

JB – ‘& I’m Fine Today’, the latest album from SUSTO, garnered acclaim from critics and is beloved by fans. How did the sound of SUSTO evolve from the early efforts to what fans see now?

JO – I think the honest answer is that we just had more resources for & I’m Fine Today, and we also had a fan base at that point, so it was like a green light for us to explore and go for new sonic territories. It was mostly the same people involved in the process, but we had a bit bigger space (both were recorded in a storage unit, but the 2nd was done in a double unit), and we had more experience and more money which meant more time to explore and create. It was honestly a difficult process with a lot of opinions and ideas floating around, but I’m very happy with the work we did on & I’m Fine Today, just as I am with the first album. I think there is a natural sonic & narrative evolution of SUSTO unfolding and the differences and similarities between the first 2 albums are a manifestation of that. They are both moments on a timeline that continues to reveal itself. Hope that doesn’t sound too trippy.

JB – ‘& I’m Fine Today’ has songs with multiple different sounds driving it. What would you say the message of the record is?

JO – I really think every SUSTO album shares a message. I think the message of the band in general is the importance of positivity and perseverance. Life is beautiful and existence is a gift, but also the world is a very fucked up place and life is suffering. Managing an understanding of that and a healthy balance of both realities … that’s something I constantly grapple with and hopefully that comes across in the songs because the songs are really just a personal form of therapy for me that becomec public and shared through recording and performing.

JB – Your latest tour has you doing the solo thing on stage, what’s the story behind the ‘Stories’ tour?

JO – Yeah, it’s basically just me singing, playing guitar and my friend Jordan Igoe singing backing vocals & playing piano; so it’s a very stripped down tour.  I’ve toured solo a lot over the years because when you’re first starting out it can be hard to afford bringing a band everywhere you go. I had to learn to be resourceful to get the music out there in far off places and I had to learn to be entertaining as a solo performer. I’ve  had a lot of fun with that over the years and thought it would be cool to do a whole tour dedicated to that kind of performance.  As I’ve been sowing seeds in Europe these last couple of years I’ve done quite a few solo tours that were story oriented, like this tour, and I thought it would be cool to bring that back home as well. It’s been really fun so far and a great chance to give a little bit more of myself and my story to the audiences closer to home.

JB – Who is a musician that influences or inspires you?

JO – It’s really hard to answer this question because the answer is a really long list. I am constantly inspired by people, musicians and otherwise; people I know and people I’m just a fan of. Locally, my friend Wolfgang Zimmerman is always inspiring me, and on a large scale artists like Phosphorescent, Cat Power & Nick Cave. I love watching artists make decisions from afar and I love learning from people by seeing how they write, perform, and present themselves.

JB – What do you see on your musical horizon?

JO – We have a new album coming out very soon and several big tours to follow, so I’m looking forward to beginning a new chapter in the book of SUSTO and a new chapter in my life. It’s such an incredible opportunity to do what I do for a living. I’m excited to keep going.

You can follow more of Justin and SUSTO at the following:

Frederick the Younger: An Interview with Jenni Cochran 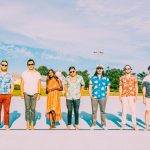