For many artists such is life on the road. It’s a routine that feels oddly comfortable after thousands of shows. Your internal clock is the opposite of your audience and your work is other people’s entertainment. But you love every minute of it. It’s the best job in the world. South Carolina’s own John Wesley Satterfield is the consummate touring musician. Clocking in hundreds of shows a year all over the US he is busy and for good reason. He delivers well written songs with quality musicianship. It’s a combination that’s led to a fast growing fanbase and steadily larger venues in bigger cities.

A native of Chapin, SC, John has been playing clubs and venues throughout the state and region since 2008. However, in 2012 he decided to take his music to Nashville not only to be surrounded by the musical culture that is entrenched there, but also to tour from a much more central location. Using Nashville as a home base, cities that were previously inaccessible are now well within striking distance. Areas like Mississippi, Alabama, Ohio, Tulsa, and even Chicago are now all regular tour stops. Nashville has the dual role as a hub of musical activity, but also the geographical good fortune of allowing east coast musicians to reach the west, and for west coast musicians to reach the east. It is one of the little known characteristics of that magical city which enables it to support so much talent in such a small area.

On Friday November 1st, All Saints Day for all of you that are into that sort of thing, John Wesley Satterfield brought his Damn Fine Company into The Loose Cockaboose to let us all in on what they’ve been up to lately. With him on guitar was his roommate and fellow band leader Mac Leaphart, local legend Reggie Sullivan on stand up bass, and drummer Jeremy Robertson, who along with along Lady Antebellum’s guitarist Slim Gamble is also a member of Satterfield’s local band back in Nashville.  John has always been known to surround himself with top notch musicians and this night was no exception. The band was tight, but just rough enough to call itself country. The songs were delivered with purpose and the covers were selected with care. In particular the Johnny Cash cover “Sam Hall” was a fine performance with the vocals right up on the mic as only Johnny Cash would have it. Mac Leaphart gave a truly beautiful rendition of John Prine’s “The Speed of the Sound of Loneliness.” It really is a formula that can’t miss. Talented Musicians + Well Written Country Songs = Quality Entertainment.

It was a special evening of music that unfortunately doesn’t come our way nearly as often as it used to. If the opportunity arises be sure to check out John Wesley Satterfield and His Damn Fine Band as well as Mac Leaphart who is in fine form (musically I mean, although I guess he seems pretty in shape too). While their roots are firmly anchored in the Carolinas, they are making great music with new people in new places and who can argue with that. Cheers. 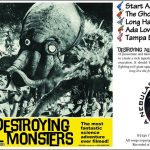