JD and the Straight Shot are on tour with legendary band, Chicago, and are making stops all around the United States. Recently, the band made stops in Columbia and Charleston, SC along one of their many dates. I was able to catch a show at the Township and witnessed a heartfelt and fun event that later took my breath away.

The band has opened for a variety of well known artists, ranging from Bruce Springsteen to Don Henley, so they are used to entertaining a packed house. Their unusual roots-blues approach captivated the audience and brought them to their feet in boot stomping tracks that would lead you to believe they arrived straight from the foothills of North Carolina instead of New York City.

Chicago hit the stage running with their well-heeled stage presence that struck the hearts of everyone in attendance. The band electrified fans both young and old with popular tracks, and reminded us why they have remained one of the most popular acts in the industry. In a startling display, the classic rock band incorporated jazzy horns with Jeff Coffey’s smokey vocals. Other current band members include Robert Lamm (keyboard), Lee Loughnane (trumpet), James Pankow (trombone), Walt Parazaider (saxophone), Tris Imboden (drums), Keith Howland (guitar), Lou Pardini (keyboard), Ray Hermann (woodwinds), and Walfredo Reyes (percussion).

They are the epitome of super stars, which was obvious from the moment their feet hit the stage. 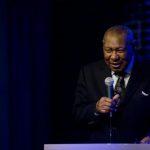