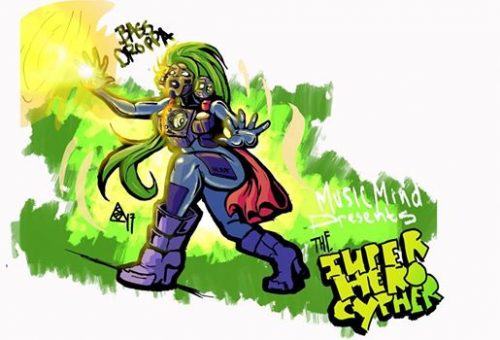 Let start by saying with all of my musical knowledge, hip hop and rap are two that I might be the least familiar with, especially in the underground scene. Also, I have one big issue that I need to address right here in the beginning. This was publicized as an event for “Everyone” including children. This doesn’t reflect of the event or the performers, because they were all fantastic. However, this was definitely for a mature audience. Later on in the review, you will see what I mean. As I casually walked to the Wired Goat in the Vista for the show, I realized it is an extremely pleasant South Carolina evening. The lovely atmosphere of the Vista seemed hardly the setting for a hip hop event! I playfully chewed on the irony as I drank an Americano in the upstarts of the Wired Goat.  Knowing this is Music Mind Productions’ second time putting on an event like this, I wasn’t terribly surprised by a late start. In fact, artists and venders were showing up even an hour after the doors opened. I thought, “Maybe this is how this community works, and I just missed the memo!” Nevertheless, I had time to float around. The rustic style of decoration felt at home at this organic, dare I say hipster, coffee shop. Even so, it still seemed an out of place location for an Underground Hip Hop show.

Like I said earlier, the Wired Goat is a fantastic coffee shop. Hosting an event of this size was a little bit of a burden for a small place. The had early issues with power. The air conditioning could not keep up with the amount of people in the basement, and there was only one bathroom. It wasn’t terrible just a little off kilter.

The local artists where fantastic! Great pieces of work from artists like Roc Bottom, That Godzilla Guy, and Soda City Art showcased their wares. If you dig comic book art and culture, this part of the definitely for you. Hypersoft was there promoting an Indie video game called Barricade that people could try out. The sponsor of the event, Seven Senses, were promoting their smoke shop. They were a really cool bunch of guys, and they sell all kinds of stuff in that neat little store.

The crowd was excited to hear the artists, and it seemed like everyone in attendance knew someone performing. The lineup of the show was well crafted. You can tell that the intent was to build a community. Let that sink in.  Getting people involved in this culture was definitely important to the artists there. It was not about selling merch or tickets. The order of how the artists performed was important too. The performances started with the newer and less seasoned performers, while more locally known and popular artists closed out the show. I know what you are thinking, “No shit, Jeff! That what all multi-artist shows do!” Well not always. When I say least seasoned in the sense of underground hip hop, I mean that in 8-mile type way. (No offense to the hip hop community if that reference isn’t well received.)

The Line Up Included:

Also, the DJ for the night was DJ Matty Matt, and the MC was J-Mack – both of whom did a great job. Unfortunately, I can’t review every single performer. They all did a fantastic job. There are four that tended to stand out from the rest.

“Hip Hop Geek”– He was one of the more up and coming artists, but I wanted to give him a shout out for two reasons. He was the only one to truly embrace the SuperHero/HipHop theme and also by legitimately being a huge Geek. That what he was rapping about and you got what you saw. I liked that.

“H3RO”– seemed to be one of the more popular artists at the show. A lot of event goers had his t-shirt on, so I assumed I was in for a treat. I was, his songs where well crafted, meaningful and had emotion. He talked a lot about internal conflict and personal struggle, or as he would say “I’ve got my weapon drawn, Zombie Apocalypse, I will survive from Dust till Dawn.”

“Ghost Unknown”– This group was the only non-local group coming in from Charlotte, NC, and they talked a lot about the “Juggalo” community. These two gentlemen could rap fast and hard, but I brought them up because of their lyrics. Remember earlier when I said this was an explicit review? Well, here you go. Almost all of the musicians cursed in their songs, but it was always in passing. These guys took it to a whole new level. One of the least vulgar lines was “Kidnap your little sister to piss on her tits”. Yes, I said least vulgar. They talked about kidnap, murder, rape, statutory rape, anti-homosexuality and many other colorful things. But they also had the most prideful lyric as well “C-A-R-O-L-I-N-A Carolina born and raised.”

“Wyze Mindz”–  After a twenty-minute technical delay, this duo, which by far where the most locally know group here, started. I loved them! They clearly have been working together for years, and it showed. They fed off of each other with every line, and with a drummer and a DJ scratching records old skool,  I was eating it up. They had a very progressive theme to their songs, talking about current global issues and the problems that many non-white Christian groups face today.

Overall, I think this event was a great idea. A little bumpy with the execution, but that comes with time. If you enjoy the underground hip hop culture and community, I would look everyone up on that list and check them out, although be mindful of their lyrics and inviting a “General – All Ages” audience in the future. Even so, I would like to see more shows like this as the community continues to grow. 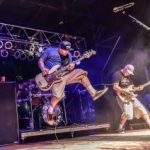