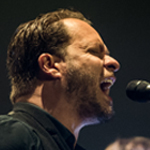 Amos Lee does not want to be on stage performing these songs for you, but he is not the one in charge. The show is not about Amos Lee as songwriter, solo performer, or singer fronting a band of talented musicians. It is all about Amos Lee’s Voice, an instrument so inherently and wildly musical that it has taken over completely. This Voice has launched a career, demanded that songs be written for it, and has taken off on tour, dragging Amos Lee and his band along in its wake.

The stage is laid out just like the Voice wants it. Left to right it is set for keys, bass, drums, and then it looks like a music store threw up on stage left. Guitars, mandolin, pedal steel, dobro, banjo, saxophones and more litter the spots for two guitar-focused multi-instrumentalists. The Voice is suited to a variety of musical styles and the band needs all those instruments in its palette to build different sound structures for the Voice to dance on and manipulate. Whether it’s folk, soul, or bluesy rock, the Voice wants the band ready to go wherever it wants to take the show. Four mics stand ready for backing vocals because the Voice likes to work with other voices. Center stage stands empty, ready to receive Amos Lee.

Slow, low organ starts the show. The rest of the band joins in, keeping the growing sound pitched low and barely bubbling into a swell, teasing the audience into anticipation. Amos Lee strides boldly out to his spot front and center, acoustic guitar strapped to his back. The cheering of an appreciative crowd welcomes an adopted son back to town and the band launches into the opening set of modern folk. This is when Voice jumps out to shine.

Immediately, the visual staging of the performance is striking. The stage is fairly dark, although the band members are lit well enough for their faces to be seen. Amos Lee is not. Lights stab out low from the rear of the stage, backlighting the singer whose silhouette often blends into the drum kit. He lurks behind the microphone and uses his music stand to disrupt eye contact with the front row. For a front man, he seems to be doing all that he can get away with to be invisible because the audience is not here to see Amos Lee. They are here to experience his Voice and there is no need for visual distractions like seeing its source.

Distinct instrumentation and musical style build the sound just like the Voice wants. Bass lines drone low and smooth. Drums are tuned low and cymbal touches are light. The organ pads out the bottom and mid-range. Guitars hum along in time without the jangle or glare so common these days. Dobro and pedal steel solos start low and gently work up into soaring chorded declarations, foreshadowing the vocal flourishes that will pop out at the next chorus and thrust the song forward. The music has a classic sound, with lush backing vocal harmonies complementing the arrangement to build a strong, solid base from with the Voice can launch itself.

Amos Lee can flat-out sing. It is clear that singing is his direct connection to music, and it pours out of him almost unbidden. He has great range and power, and he has learned to rein in the Voice from its earlier, neo-soul arpeggios into a more even performance, better suited to his travels in a folk direction. At first. As Amos’s visceral connection to the music pours out into the room over the course of the opening set, he lets loose his grip on the Voice and it starts to have its way with the songs. Leaping, falling, skipping and sliding around but always landing just so, perfectly in place. Planned reproduction of the recently recorded product becomes gospel-tinged soul singing over rocked-up folk, and the show is so much better for it.

Eventually, the band takes a break and Amos Lee, his acoustic guitar, and Voice step up to perform on their own. He plays some of the early tunes that helped to launch his career, shyly weaving in stories of his time at USC, early musical days with Hot Lava Monster, and working at Papa Jazz. (Speaking of Hot Lava Monster, their guitarist Mike Schaming joined Amos’s band for part of the encore, turning one song into a Hot Lava Monster moment with his signature sound and blistering solo work.) Amos even interrupted the audience-beloved “Arms of a Woman” to admit that when he wrote the song he had yet to be, as the lyrics say, “at ease in the arms of a woman” but he certainly was hoping to be soon – a very human moment of self-deprecation that removed the barrier between audience and stage. That solo set of songs and stories locked in the artist-to-audience connection.

The band slipped back onto the stage to gather around a single mic and perform acoustically with a heavy emphasis on their vocal harmonies. This single mic-technique portion of the show was by far the highlight on the night. Every vocalist got a chance to sing lead on at least a verse. This gave Amos a chance to show off his vocal dexterity, providing harmonies and accents while others carried the melody. It sounded like a young soul singer had just wandered into a bluegrass jam. When singing lead, Amos worked the mic to get a broad range of sounds and tones from his Voice, flattening it out, loading it up, and twisting it around like an auditory chameleon. The surprising medley of “Fat-Bottomed Girls” and “Single Ladies” was definitely a crowd favorite and helped to ease the transition into the final set.

Instrumentally, the stars of the show  were the rock-solid drumming of Freddie Berman and Andy Keenan, predominantly on dobro and pedal steel. The most notable aspect of Amos Lee’s songwriting is the strong sense of hope that comes out in even his saddest songs. Maybe this is the work of the Voice. Living under the influence of such a powerful musical tool must be a constant source of joy that turns even darker thoughts towards the positive. Amos Lee serves as a great vessel, creating songs to bring the Voice out into the world. Columbia was lucky that the Voice carried Amos Lee back here to share its music for a night. 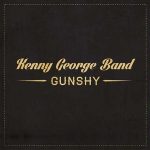