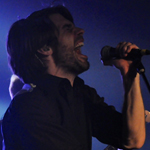 There are bands that come out on stage and give the crowd there money’s worth and not a cent more, and then there are bands that unleash their respective music on a crowd like the very lives of the band members hang in the balance. Look at bands like U2, Grace Potter and The Nocturnals, The Avett Brothers, and The Rolling Stones (yes, even in that band’s advanced years), and you’ll see what I’m talking about. Once onstage it’s those band’s mission to entertain the hell out of you, and if even one audience member leaves unsatisfied then it was all for nothing. That’s the feeling I had recently while watching the Knoxville, Tennessee band The Dirty Guv’nahs do their thing onstage at the Pour House on James Island near Charleston, SC.

Prior to the show I got a chance to sit down with Dirty Guv’nahs lead singer James Trimble and talk about the band’s history. While sitting on a bench outside the venue we were frequently approached by local fans and Tennessee transplants who had come out to see the band, despite it being a Thursday night. Trimble graciously spent time with every person that approached, and in between he talked about a band that had only really been touring in a serious manner for the last 3 years despite being together for almost 7 years. The band, which in addition to Trimble includes guitarists Michael Jenkins and Cozmo Holloway, keyboardist Kevin Hyfantis, and brothers Justin and Aaron Hoskins playing bass and drums respectively, met while they were all attending the University of Tennessee. After finding it’s sound, which is decidedly roots rock in nature, the band first set its sights on conquering its home town (the band has been named Knoxville’s Best Band by one local newspaper every year since 2008) before striking out to see about the rest of the known world.

According to Trimble, the last three years of touring has been good to the band. In addition to recording its latest release, 2014’s “Hearts On Fire,” the band has already tasted some sweet victories in the business. They’ve opened for the likes of The Zac Brown Band, Need To Breathe, Wilco, Blues Traveler, and The Black Crowes. When the time came to record the band’s second album, “Youth is in Our Blood,” the band found themselves making the album at the home studio of Levon Helm in Woodstock, New York. “Levon had invited us up to play as the opening act at one of his Midnight Rambles that were held at his farm in Woodstock,” said Trimble. “We ended up recording our next album at the studio, and while Levon wasn’t the producer or engineer, he was always around, listening to us and offering suggestions.” Trimble also talks about being invited to Helm’s home for a Christmas party during the recording of their album. “We figured it would be a big party with loads of people,” said Trimble, “but when we arrived it was us and maybe 25 other folks. It was more of a family get together. I always thought it was really nice of Levon to include us since we were away from home for Christmas.”

Trimble says that the band’s latest release was mostly recorded in the band’s own home studio, and was produced and engineered by the band members. “We did almost everything ourselves, and we’re pretty proud of how it turned out.” Released just last month, “Hearts On Fire” has already achieved one feat that makes Trimble proud. “The first week the album was out, we were Number One on Billboard’s Heatseeker Chart,” said Trimble. “I thought that was pretty amazing.”

The Dirty Guv’nahs have played in South Carolina frequently over the last couple of years, performing at Charleston venues such as the Windjammer and the Pour House. At least one Charleston act came up in our conversation. “We had Shovels & Rope open for us in Nashville about a year or so ago,” said Trimble. “Now look at them!”

In concert the band delivers a powerful and memorable performance. In front of a packed Pour House I had a chance to see exactly why the band was so popular both in its home state and around the Southeast. Trimble was a charismatic front man, strutting around the stage in a manner that would definitely win approval from higher rock powers such as Mick Jagger or Bono. Several times during Thursday’s show Trimble stepped from the stage onto the speakers that jut out into the crowd, effectively allowing fans to almost completely surround him as he sings. While Trimble plays acoustic guitar on a few songs, it is Jenkins and Holloway that provide the musical punch that is needed to match Trimble’s onstage presence. Utilizing the Pour House’s lights and feeding off the crowd’s energy, The Dirty Guv’nahs definitely impressed the local crowd. While the new album doesn’t quite recreate the live experience (and let’s face it; what studio album ever has?), it is nonetheless a great listening experience. Kicking off with a clap and stomp reminiscent of The Lumineers‘ “Ho Hey,” the album reminds the listener of powerful musical storytellers such as Grace Potter and Will Hoge. From the hopefulness of “Morning Light,” to the ridiculous catchiness of “Ever Start to Wonder,” to the lovely Black Crowes-like retro groove of “Slow Down Easy,” this is a beautifully crafted recording. Even the final track, “Canyons,” is a quality song. Perhaps the best track on the album, and one that really smoked onstage last Thursday, is “Under Control.” Between the wailing slide guitar and Trimble’s singing about yearning to free, this is a song that was made to be played at the highest volume possible. If you’re looking for a regional band that doesn’t skimp when it comes to performing live, The Dirty Guv’nahs definitely fit the bill. 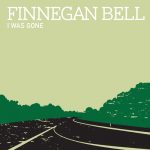 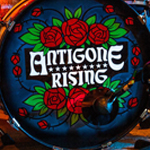