Charleston has always been blessed with a musical bouillabaisse of styles and sounds. When it comes to reggae, it doesn’t get much better than the Dubplates. With a hefty ten members, this reggae outfit definitely brings it live and refuses to pigeonhole itself within the genre’s myriad of styles. That open-mindedness is on full display on Box Full of Steel, the band’s latest release. Dubplates members Big Hair (David Brisacher) and Daddy Brady (Brady Waggoner) wrote and arranged the music on Box Full of Steel, and the album features an incredible array of guest artists, including Junior Reid, Mix Master Mike, Elephant Man, Future Fambo, Zumjay, and Johnny Cash. Okay, so the late Man in Black obviously didn’t step into the recording booth with Papa Robbie and the rest of the Dubplates, given that Cash has been dead for almost a decade and a half. Thanks to permission from the Cash estate though, we can hear Derek Mathis and Papa Robbie trade lyrical magic with Cash on a souped-up and rum-soaked cover of his classic “Ring of Fire”, which further proves that just about any great song sounds even better when set to a reggae groove.

Probably the biggest outside influence on the album though comes courtesy of one of reggae’s biggest living legends. After an intro full of hype and a dizzying array of samples, none other than King Yellowman trades words with Papa Robbie, Daddy Brady, and Big Hair. The resulting track, “Uh Huh!”, hits hard. One might feel that the band was pouring everything into grabbing the listener with that first incredibly catchy track. It soon becomes clear though that “Uh Huh!” is the Dubplates simply clearing their collective throats. “There You Go” features insane turntable work by the Beastie Boys’ own Mix Master Mike, while Future Fambo contributes to what is probably my favorite track on the album; “Drunken Master”. Elsewhere “Elephant Man” adds nicely to the mellow yet melodic “Burning Clean”, while Daddy Brady gives “John Crow Bullet” an authentic old school ska feel. It’s an ambitious project that fully deserved to rocket to #4 recently on iTunes’ Top U.S. Albums chart. Papa Robbie recently told me that getting to work with King Yellowman was a “bucket list item” he’d dreamed of for years. “I saw him at Myskyns in Charleston back in 1988,” says Robbie. “He was the first reggae artist I saw live and I knew I wanted to be able to do what he does.” You see kids; dreams do come true. 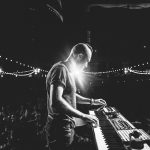