Pop quiz kids…who is Tyler Mechem?  That guy in the band, Crowfield, right?  Well, yes, technically you would be correct.  However, I ask this question not so much to test your South Carolina band history, but rather to make a point.  Quite often, the name of a band as a whole has a tendency to overshadow the individuals which make up the entity in the first place.  Now, granted, bands sell themselves as just that…the band name that they themselves have chosen.  However, it is pretty obvious that a band is made up of individually talented people, and that unique talent combined is what it takes for a band to come alive.  With this in mind, let’s concentrate on the talents of the individual musician.  In this case, I speak of Tyler Mechem, the lead singer and songwriter of the former band, Crowfield.

It is hard to believe that it has been six months since Crowfield played their last show at the Charleston Music Hall on March 15.  In the time that has passed since that great send off, Tyler Mechem has been a busy fellow.  Just recently I had the opportunity to catch up with Tyler to reflect upon where he has been, as well as discuss a bit about his momentum forward.

Coming from a family of jazz influenced musicians, Tyler was always encouraged to play music and rehearse.  However, he admittedly felt a bit out of place and somewhat intimidated by the surrounding talent while growing up in Indiana.  It was not until he got to college and began to experiment with songwriting that he felt comfortable.  Starting with a strong work ethic, Tyler dug deep to foster a belief in himself that he could make it is a singer /songwriter, even if the talent was not completely there initially.  Taking cues of encouragement from friend and future bandmate, Joe Giant, the two musicians began to take their show to the people.  By the time Tyler and Joe were seniors in college, they realized that neither one was sold on the idea of getting a standard 9-5 job. Instead, they decided to give music a full time shot and threw a dart at a map on top of a dartboard, ultimately landing them in Charleston.

Upon arriving in Charleston, these two eventually started the band Crowfield, which, as many people know, ended up having a viagra online real strong following and great success.  However, it was not cialis online sales to last.  According to Tyler, the good shows stopped being as rewarding as they had been initially.  Likewise, the shows that were disappointing were more disappointing than they should have been.  Ultimately, it was Tyler who pushed the idea to put aside the band.  The combination of touring, dealing with the business of being in a band, plus individual shifts in priorities also did not help matters when it came to the survival of the band.

Upon the closure of the Crowfield chapter, Tyler has felt as though the weight of the world had been lifted off his shoulders, and most likely, the rest of the band has felt the same way.  For Tyler, he was reminded again how fun and casual playing music can be.  Without any outside pressures (except his own expectations) to contend with, Tyler now feels that he is a bit more open and free to drive towards song ideas that he many have had to otherwise sell to others when leading the band.  Right now he does not have a preconceived idea of what his identity as a songwriter should be.  In many respects, he is still figuring that out.  He just knows that the music he is producing feels comfortable.

I also asked Tyler if recently becoming a first time father has had any influence on his songwriting. Obviously, the birth of his son has evoked a big life change and unbelievably strong emotions. However, there are pivotal moments from Tyler’s life that occurred when he was 18 and 19 years old which he still writes about currently.  Likewise, he feels to write a song so early in his young son’s life may come off as cliché and could lose its true emotional value, versus at some point in the future.

Many songwriters approach songwriting initially from either the lyrics or melody.  For Tyler, he normally arranges the structure around the chorus, verse, music, lyrics, and melody all at the same time.  He then will go back and review the lyrics just make sure that everything ties together throughout the entire song.  Collaboration with other songwriters is an interesting topic as well.  Tyler certainly thinks about the prospect of writing with others, and he has a good time working and performing with fellow friends and songwriters, such as Luke Cunningham and Ryan Bonner under the moniker “The Dubious Battles”.  In truth though, Tyler admits he likes to be in the driver’s seat and enjoys the idea of making the decisions himself, since he feels that he knows best the overall direction of the song he has written.

Tyler has begun to turn his attention to a style of music music which he calls, “heartland”.  In this vein, he has been working on an EP which should be available in its entirety very soon.  His approach on this new EP is to take on a dry and organic approach where the human element of the performance will be pronounced.  Once the EP is released there are plans for some tour dates in support of the record.  When it comes to playing live, Tyler is out there sparingly for the moment.  He is concentrating on his recording and striving for balance with his other responsibilities.  Tyler’s philosophy is to simply be successful enough that each new album continually funds the next.  In my opinion that is a great approach and one that I hope will keep Tyler Mechem in the game for a long time to come. 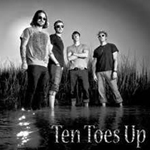 Closing in on a Musical Chapter with Ten Toes Up 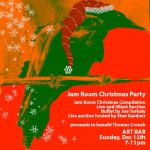